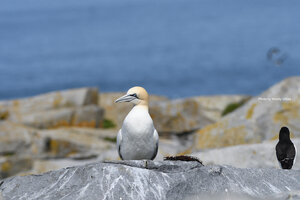 The annual Down East Spring Birding Festival provides a unique birding experience during spring migration and the breeding season with four days of guided hikes, boat tours, and presentations, all led by local guides with local knowledge.

Come see why eastern coastal Maine and the waters around Machias Seal Island (home to Atlantic Puffins!) have been identified as "one of the important bird areas in the US" by the American Bird Conservancy and why the Department of Inland Fisheries & Wildlife has named the Down East Spring Birding Festival ONE OF THE BEST in the country. Yankee Magazine listed it as an Editor's Choice event in 2014.

The Cobscook Bay area is home to numerous year round and migratory birds. Over 400 bird species have been sighted in Maine. Almost three-quarters of those species have been sighted here. During the 2015 festival, the Solitary Sandpiper and White-winged Crossbill were designated as the most unusual sightings. The most unusual sighting is described as the species most unusual to the Down East region at that time of the year. Other species sighted that are unique to this area were the Black-legged Kittiwake, Great Cormorant, Atlantic Puffin, Gray Jay, Spruce Grouse, 25 species of Warblers, Boreal species, and the American Woodcock.