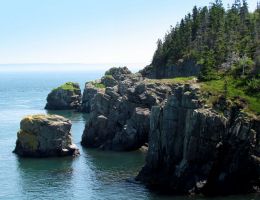 If you need the predictability of chain motels and restaurants ... If the lack of a Starbucks within walking (or even driving) distance incites mild panic ... If your idea of vacation includes lots of shopping and nightlife ... well, frankly, you'll be happier elsewhere.

But if you crave sweeping views of rocky coastline and walking on quiet, forested, cliff-side paths ... prefer tiny, tucked-away galleries to malls ... and have a bit of an adventurous spirit ... you'll love this part of coastal Maine and Canada's New Brunswick.

Those who take the time to find their way here, away from crowds and traffic, are richly rewarded with stunning vistas across land and water; spruce- and fir-clad islands; an abundance of wildlife, including seabirds, seals, and whales; and endless opportunities to hike, kayak, and stroll quaint, historic seaside towns.

Lovers of the outdoors come for the hiking, bicycling, bird-watching, kayaking, and lighthouse exploring, all in an unspoiled setting where you're likely to have a trail or cove all to yourself, even in the height of summer.

Slow Down and Explore 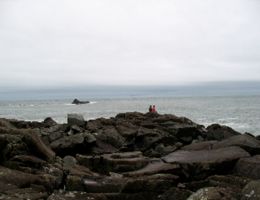 Be ready to take your time here, to account for driving distances and ferry schedules, but also because you'll want to slow down, explore, and soak in the natural beauty. Be sure to bring your passport, and don't forget to set your watch ahead an hour when you cross into New Brunswick, and back an hour when you reenter Maine.

Down East Maine—"Down East" is an old nautical term referring to the prevailing wind—and maritime New Brunswick hug the Bay of Fundy, home to the highest tides in the world. Not surprisingly, the ocean has shaped the region's history, economy, and culture. 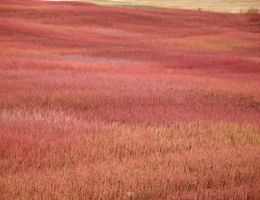 Our area is rich in history, from its geology to its people. To truly appreciate the beautiful, unusual terrain, it helps to know that many millennia ago, it was covered with glacial ice. The glacier moved from Canada into Maine, carving out and scraping the landscape in its path. The melting of the ice, which began about 17,000 years ago, revealed deposits of stone and granite and vast, rolling blueberry barrens, where wild blueberries grow amongst boulders. 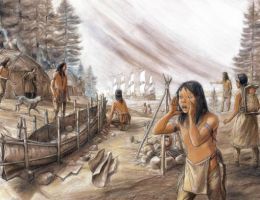 The receding of the ice also allowed forests and animal populations to grow and spread, which no doubt attracted the area's first inhabitants, who arrived between 13,000 and 11,000 years ago. These Paleo-Indians—ancestors of today's Passamaquoddy, Micmac, and Maliseet nations—took advantage of the bounty provided by the sea and the woods.

Norse explorers came to this area as early as the year 1000, but it wasn't until the late 15th century, when John Cabot sailed here from England, that Europeans began to learn about present-day Maine and New Brunswick and their abundant natural resources. A group of French colonists settled on an island in the St. Croix River between Maine and New Brunswick in 1604, but after suffering through a single treacherous winter that took the lives of many in their party, the remainder moved to what is now Nova Scotia. That settlement served as the center of the region France claimed for its colony of Acadia.

English explorers concentrated their efforts west of Maine's Penobscot River, whereas France dominated the area east of the river. However, both countries claimed some of the same lands, and a series of disputes in the 17th and 18th centuries resulted in England driving out some 10,000 Acadians, who were scattered as far south as Louisiana. In the 1780s, they were allowed to resettle on land set aside for them in the Saint John River valley, and many returned, contributing to the area's vibrant cultural heritage. Today, France's legacy is evident in New Brunswick's being Canada's only officially bilingual province, and you'll see signs in both English and French. 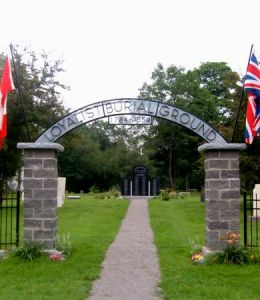 The American Revolution also left its mark on both Down East Maine and coastal New Brunswick, which were, at the time, still part of Massachusetts and Nova Scotia, respectively. The first naval skirmish of the war took place in 1775 in Machias Bay, when British military leaders sent Ichabod Jones from Boston to Machias to acquire lumber for building barracks. The local Patriots not only refused to do business with him, but chased and captured the armed British schooner Margaretta, which had been sent along as a cargo escort.

Just after the war, the British persuaded a number of Loyalists—those who had been on England's side—to settle in the New Brunswick area with the promise of free land. Loyalists settled the towns of St. Stephen, St. Andrews, St. George, and Saint John, among others, and old Loyalist cemeteries and many buildings and houses from that era still stand in testimony to a war that changed history. The awarding of land was nothing new; in fact, the first settlers of Campobello Island were also recipients of the British empire's favor. King George III had given a grant for the island to Captain William Owen, a Welshman, who arrived in 1770.

Having adopted the same custom, Massachusetts, along with several other states and the U.S. government, promised land to soldiers who served in the Continental army against the British. Because Maine was still part of Massachusetts then and land was plentiful, many of these men and their families came to this area, settling communities around Cobscook Bay. The initial wave of British settlement in this area came after the end of the earlier French and English War (notice how many towns around here list 1763 as their settlement date). The post-Revolutionary movement into the region was larger, however.

Despite attempts to stop it, smuggling between the United States and New Brunswick was common for many years after the American Revolution, when the border between the two remained vague and restrictions on trade provoked local resistance. One need only look at a detailed map of this area, with its ragged coastline, dramatic tides, and countless islands, to see how challenging it was and is for customs officials to control illegal activity. It is easy to imagine items such as flour and salt beef being quietly transferred between boats in hidden coves. 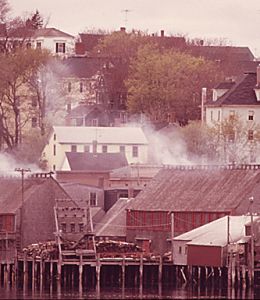 Also late in the 18th century, the town of Eastport, on the U.S. side of the bay, was established. Just a few years later, Lubec split off from Eastport and formed its own community. Other settlers arrived from Scotland and Ireland in the 19th century, bringing their own traditions with them. Research continues into old stories about possible area Underground Railroad stops that helped escaped slaves on their flight to Canada. Today, events in various communities, from festivals to parades, celebrate the area's history and the heritage of the diverse groups that have made their home here.

Fishing, shipbuilding, timber harvesting, Christmas wreath–making, and wild blueberries—gifts from nature's bounty—have all been part of the region's economic backbone. Smokehouses once lined Lubec's streets, meeting the demand for smoked herring, and Eastport and Lubec were home to a number of thriving sardine canneries until the late 20th century, with each claiming the title Sardine Capital of the World.

Although the canneries and smokehouses are gone and the shipbuilding days are over, nature is still very much a part of the economy and daily life here. Rugged, unspoiled beauty coupled with an independent spirit continues to draw people involved in the creative arts and ecotourism. The intimate relationship with the land and sea is reflected in a strong sense of place that is rare in an increasingly homogenized world.

Let us know how we can help you plan a visit by emailing us at info@visitlubecmaine.com . Whether you're seeking the freshest lobster, a field of soft-purple lupine, unpretentious people, or simply the soothing rhythm of the tide, you'll find it here. We look forward to sharing our special corner of the world with you.