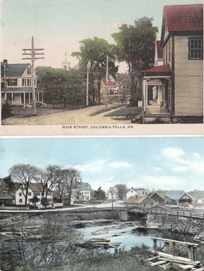 Columbia Falls, at the head of the tide on the Pleasant River, is one of the best-preserved 19th-century villages in the state.

Founded on the lumber and saltwater hay industries, the village of 600 folks shows a nice mix of Georgian, Federal, Greek Revival, Victorian, and 20th-century homes. Bypassed by U.S. Route 1, Columbia Falls was spared large fires, modern convenience stores, and wide highways, and appears much as it did in the 1900s.

Columbia Falls is home to (in the village, off Rt. 1) the Ruggles House Historic Museum, Columbia Falls Pottery, the Wild Salmon Resource Center, and (on Rt. 1) Wild Blueberry Land and the Wreaths Across America National Office & Museum. There is a canoe launch below the fire station.