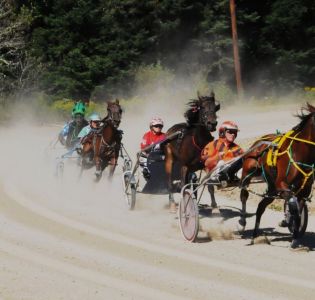 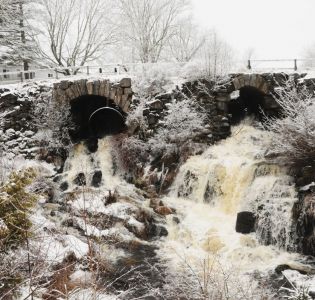 The arches from the old Iron Works, ca 1832. They have survived all these years with no mortar. The huge pipe in the left arch was part of the pennstock for generating electricity. Photo by Frederick Gralenski view larger photo 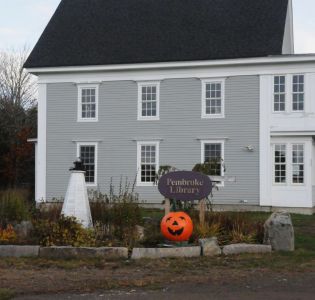 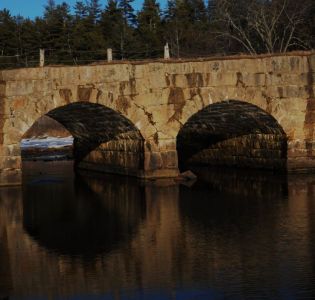 The arched bridge for Old County Road. Built a little after the railroad came to town (ca. 1900) with granite from Franklin. Photo by Frederick Gralenski view larger photo 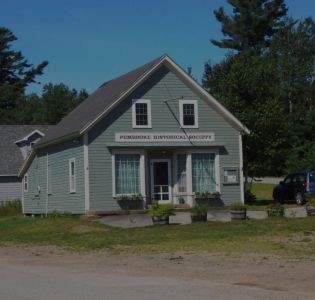 Pembroke, once known as Pennamaquan, had a population of 840 at the 2010 census. First settled in 1774, it was incorporated in 1832. Though no industry resides in Pembroke today, the town's history includes shipbuilding, brickyards, a gristmill, and saltworks. Pembroke is home to Reversing Falls Park.

The Downeast Amateur Astronomers Observatory, high on a hill in Pembroke, welcomes visitors to revel in the clear, light-pollution-free skies. Bring a light jacket, insect repellent, and, if you wish, an outdoor reclining chair. Come for a quick look or stay for an hour! For more information, contact Charlie Sawyer at csawyer7@roadrunner.com or (207) 214-5706. Donations to Downeast Amateur Astronomers are welcome.

Historic Buildings and Places
The Charles Best house, a Greek Revival–style house on County Road in West Pembroke, is listed on the National Register of Historic Places. Other houses of note include the Gothic Revival–style George Hatch house, a good example of the cottage plans of Andrew Jackson Downings that were popular in the 1850s; the Bridges house; the Farnsworth house; and the Pattangall house.

St. John the Evangelist Catholic Church is a unique structure featuring a facade with a single small triangular window, a simplified Gothic arch over the door, and extremely simplified Greek Revival pilasters. The plain interior is highlighted by a gold-and-white altar and a simple-yet-ornate Gothic rear altar. A historic building that was once a private residence and later the Grange Hall was restored and converted to use as the Pembroke Library, the town's first.

The Pembroke fairgrounds, unused for more than a decade, was revived for equestrian events by the Pembroke Trotting Association in 2001. The property dates to the 19th century, when it was used for agricultural exhibitions. From the 1940s to the early 1980s, the site was a popular destination for fans of harness racing, when Pembroke was the only town in the state where Sunday racing was permitted.

Churches
As of 2014, Pembroke had four active churches:
1) Pembroke United Methodist Church was formed in 2001 when the Ironworks Methodist Church united with the People's Methodist Church. The new congregation is housed in the former Ironworks church building on Little Falls Road. The structure dates to 1863.
2) Grace Christian Chapel was established in Pembroke in 2003 in the former People's Methodist Church on Leighton Point Road. The building was erected in 1869 as a Methodist vestry.
3) St. John the Evangelist Catholic Church was built about 1855 by Irish immigrants who had come to the area for employment in the Pembroke Ironworks. Many of the founders are buried in the churchyard, their graves marked by stones proudly inscribed with the Irish county of their birth.
4) First Baptist Church of Pembroke, built in 1853, has undergone many modifications to its original Greek Revival structure over the years. The old building burned to the ground in 2012. The congregation has decided to rebuild.

Early Settlement
Undoubtedly, Native Americans traveled through and seasonally resided along the tidal and riverine shorelines of Pembroke. There is evidence of shell middens in the area of Reversing Falls, according to the Maine Historic Preservation Commission. They would have used the waters of the St. Croix River and Cobscook Bay as transportation routes and as sources for food. Encampments of Passamaquoddy Indians were still in Pembroke into the 20th century. The first Indian village was across the bay at St. Andrews, New Brunswick. When the British settlers began to arrive, the Indians moved to Indian Island, just off Eastport. When Indian Island was declared British Territory, the Indians once again relocated, this time to Pleasant Point.

During the European Wars, when Napoleon Bonaparte stopped the import of timber by the English from the Baltic, this area profited greatly by the sale of lumber to England. Fed by the trade this business brought, St. Andrews, New Brunswick, grew rapidly, and surrounding places obtained some share of the in-flowing wealth. One man alone cut timber in 10 days that brought him $300, and it was not uncommon for a man to come home with $500 or $1,000 in his pocket, from the sale of lumber. Money could be obtained so much more easily by lumbering than by the slow returns from agricultural toil that when the timber was gone, general poverty followed.

The original townships of eastern Maine were depicted on a survey created by Rufus Putnam for the Massachusetts Land Lottery, which divided the township into 55 lots. Ownership of the townships, excepting those 12 lots won in the lottery, passed through several owners until, in 1793, virtually the entire area between the St. Croix River and the Penobscot River was purchased by William Bingham of Philadelphia. The towns of Perry, Pembroke, and Dennysville were originally part of "Township No. 1 east of Machias," which was later divided into Plantation No. 1 (Perry) and Plantation No. 2 (Dennysville and Pembroke).

In 1800 a plantation form of government (Plantation No. 2) was established in the area currently within the towns of Dennysville and Pembroke. Public meetings were held in various private residences, and money was raised for schooling and the construction of roads and bridges.

In 1817 a committee drew up a petition for incorporation, and on February 13, 1818, an Act of Incorporation was passed by the Legislature of the Commonwealth and signed by the governor. Plantation No. 2 became the town of Dennysville. By the mid-1800s, town and county roads were established in their present locations. Two principal centers of the commercial activity developed in town. One was on the banks of the Dennys River, now the village of Dennysville. Mills, lumberyards, and shipbuilding facilities were founded. Some distance away, a village in present-day Pembroke on the Pennamaquan River developed separately and had its own shipyards and iron foundries.

Some of the earliest settlers in the Pennamaquan section of Dennysville left their names in a geographic legacy to Pembroke: Leighton Point, the Herseyside, Mahar's Falls, the Clarkside, Sip's Bay, and Coggins Head, among others. Hatevil Leighton made his way from New Hampshire to the neck that now bears his name as early as 1768, discovered the lumbering opportunities here, and formed a partnership with Robert Wilson and William Clark from Campobello to harvest timber. Edmund Mahar, who may have been a deserter from the British army, signed on as a helper, learned to navigate the treacherous reversing falls, and piloted many a vessel through, many bearing new settlers from Hingham, Massachusetts.

The Hingham migrants were attracted to eastern Maine by their fellow townsman General Benjamin Lincoln, patriot of the Revolution, who became a Maine "proprietor," purchasing with two partners in 1786 almost 50,000 acres of timberland that now make up the towns of Dennysville, Pembroke, and Perry. Lincoln later bought out the other owners and offered 100-acre parcels to officers and soldiers who had served under his command if they would bring their families, settle the area, and populate it with the workforce he needed for his business. The descendants of many of the Hingham families are still here with the names Sprague, Cushing, Wilder, Hersey, Gardner, Reynolds, Smith, Kilby, and Benner.

A few soldiers from the defeated British army — including James Blackwood, Joseph Dudley, and Richard Smith — found their way to Youngs Cove. The Bridges family was established here by Joseph, whose home at Ox Cove was the first meeting place for the town's elected leaders; his descendants included Styles Bridges, who moved to New Hampshire as a young man and became that state's governor and U.S. senator. Not all of the early settlers were of white European stock. Scipio Dalton, a black man who was reputed to be a runaway slave from a Boston household, had a cabin on the shore of what is now called Sip's Bay.

Municipal Incorporation
The residents of Maine voted in 1819 for separation from Massachusetts, and in the following year, the state of Maine entered the Union. In 1832, a petition to the state for the division of the town of Dennsyville into two smaller towns was granted. The village on the Pennamaquan River became part of the newly formed town of Pembroke.

Industry
Shipbuilding flourished through the 1870s. Among the more famous vessels built in Pembroke were the clipper ships Queen of the Pacific (1,336 tons) and Western Continent (1,222 tons). The clipper barque Comet sailed from New York to San Francisco in 112 days. This was an excellent time, considering that the record, held by Flying Cloud, was 89 days. In the early 1880s shipbuilding went into a sharp decline as steam propulsion and iron hulls replaced the wooden sailing ships. The sardine industry, which began in 1885, took up some of the slack. At one time there were five factories in Pembroke. The most modern, built in 1920, employed up to 100 people. The last, Sunset Packing Company, closed in 1962. In 20 years the population of Pembroke dropped by more than 1,000, and it has never regained the 1870 high of 2,551 people.

Education
Pembroke's earliest school building was built in 1812 at the Head of the Tide, across the road from the site that is now a small park commemorating a school built to replace it in 1842. A school on the Herseyside was erected in 1820, and later, district schools were added until the town had 11 in 1855 that served almost 900 town elementary students. The first high school, Washington Hall, opened in 1872, burned in 1918, and was replaced by a new school in 1920 that burned in 1923. It too was replaced, and graduated its last class in 1973. Since then, Pembroke students have been tuitioned to secondary schools in other towns, with the majority attending Washington Academy in East Machias.

The present Pembroke Elementary School on Route 1 opened in 1982, with the addition in 2006 of a four-classroom modular structure.

Some Famous Pembroke Natives
Thomas W. Pomeroy (1832–1926) was a stone mason and a laborer at the ironworks when he was struck by a revelation that he possessed "clairvoyant powers" to diagnose illnesses and prescribe herbal remedies. He practiced in New York City, but returned to his hometown every summer during his long life. He built an elegant mansion overlooking the Pennamaquan River and Union Square. Unfortunately, the ornate home burned to the ground in the 1940s. He wrote his autobiography, Clairvoyant Reminiscences and Herbal Recipes, which was reprinted by the Pembroke Historical Society in 1997.

William R. Pattangall (1865–1942) was a lawyer, writer, editor, and politician. He served as attorney general, four-term state legislator, and chief justice of Maine. He was a political satirist, noted for lampooning Maine politicos of his day. He was the author of a widely read collection of caustic comments published as Meddybemps Letters, and its sequel, Maine Hall of Fame.

Charles H. Best (1899–1978) was the son of Pembroke's longtime physician Dr. Herbert Best. Charles, in 1921, was the co-discoverer with Sir Frederick Banting of insulin, the "miracle drug" that has allowed millions of diabetics to live normal lives.

H. Styles Bridges (1898–1961) was born into one of Pembroke's oldest families — his ancestor Joseph Bridges was involved in town government at its inception. As a young man, Styles went to New Hampshire, where he became the youngest state governor in the nation at the time. He later served five terms in the U.S. Senate, and died while serving the sixth. He was a powerful force in the Republican Party, and was a candidate for his party's presidential nomination in 1940.

(The historical information used here was adapted from the town's Comprehensive Plan (1996 and 2009) and uses the archives of the Pembroke Historical Society.)