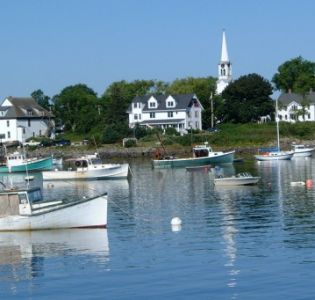 Unspoiled Jonesport is set on a 12-mile peninsula along the coast of Washington County. It is home to one of Down East's largest lobster fleets. The population was 1,370 at the 2010 census.

This is a paradise for naturalists, and a scenic treasure for photographers and artists.

The Jaffa Colony is memorialized by a stone at the site of departation and by the Maine Friendship House.  On August 11, 1866 157 Down Easters set sail on the Nellie Chapin to follow a religious leader from Jonesport in the Jaffa Expedition to establish a settlement in what then was known as Palestine. The farmers, carpenters and homemakers – called the Palestine Immigration Society – wanted to encourage Jews to return to their homeland. Their ship was loaded with 22 sets of pre-fabricated parts for houses, all prepared with lumber from Whitneyville. The 35 families set up the houses in the first neighborhood outside the walled city of Jaffa. Some returned to Jonesport within two years, discouraged. But in the 1990s the U.S. Coast Guard helped erect a monument at the base of the bridge to Beals Island, which is the point from which the Nellie Chapin departed and the Jaffa house now welcomes hundreds of international guests to the Maine Friendship House.