A Variety of Birding Habitats

Lubec is a peaceful, rural / coastal area with a dispersed population and little traffic. Our scenic views are spectacular, though sometimes obscured by coastal fog. Nonetheless, when the fog lies offshore, it is a breathtaking sight!

The South Lubec Sand Flats is debatably one of the top ten places to bird in Maine. Migratory shorebird abundance and diversity is among the highest along the eastern U.S. coast.  A number of shorebirds have been spotted including the Short-billed Dowitcher, Black-bellied Plover, White-rumped Sandpiper, Bairds, Least Sandpiper, Dunlin, Semipalmated Plover, and Lesser Yellowlegs.

For an unforgettable birding experience come and enjoy the tranquility and outstanding natural beauty in abundance in our area.

Machias Seal Island is approximately ten miles out of Cutler Harbor and is the breeding site of the largest nesting colony of Atlantic Puffins on the Maine coast. The island is designated as a bird sanctuary by the U.S. and Canadian Wildlife Service, and is also the site of a light station, maintained by the Canadian Coast Guard. Puffin-watching trips leave from Cutler Harbor from May through mid-August. Bold Coast Charter Company 207-259-4484

Birding enthusiasts visiting the island may also see razorbills and arctic terns, and on the journey to and from the island, gannets, petrels, shearwaters, common murres, eiders and guillemots as well as eagles, and marine life such as porpoises, seals and whales. 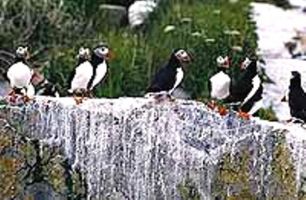 It’s called the Sunrise Coast of Maine because the sun’s rays first touch the United States here each morning. The bird-watching in Fall is just as spectacular as the sunrise views, says NWF Chief Naturalist Craig Tufts. In northern Maine, boreal forest is juxtaposed with seacoast, which means birders can see not just clouds of migrating shorebirds but also resident "specialties," such as spruce grouse, that live here year-round.

Tufts likes to use the town of Lubec—the former "sardine packing capital of the world"—as a base camp. He visits in early September, when the weather is still good and seabirds are on the move. He suggests getting up early and heading for Quoddy Head State Park, the best place on the coast to see the sunrise. Then, walk the park trails. "If the weather has been right, there should be waves of migratory land birds coming through," he says. Scan the trees for Blackburnian and Cape May warblers, but also keep an eye cocked toward the water for chance sightings of common eiders and bald eagles.

Tufts also recommends a visit to nearby Cobscook Bay State Park to explore the colorful tide pools—and to look for boreal birds. "That’s where I saw my first black-backed woodpecker and my second boreal chickadee," he notes. For shorebirds, visit nearby Lubec Flats—but consult a local tide table first. In the Bay of Fundy, the difference between high and low tide can be 20 vertical feet, and when the tide goes out, a vast expanse of mud lies exposed—a food-rich "staging area" for migrating plovers, yellowlegs, red knots, ruddy turnstones, sandpipers and sanderlings.

Another option is a boat trip to Machias Seal Island. Tiny and treeless, the island is famous for its colony of Atlantic puffins, but razorbill auks and common and Arctic terns also breed here. From the boat, watch for shearwaters and storm petrels, and—if you’re lucky—phalaropes. These elegantly plumaged shorebirds have an eccentric habit of spinning around as they bob on the surface of the water, their partially webbed feet creating whirlpools that concentrate their planktonic food. "One time, taking the ferry from Eastport to Lubec, I saw an incredible raft of red-necked phalaropes," recalls Tufts. Over an area of several acres, thousands of tiny dancers were whirling and twirling, their soft bodies almost obscuring the surface of the water.