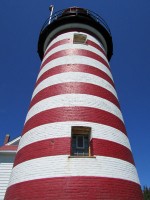 There are five lighthouses not far from Lubec, with a sixth in Calais. In addition, Passamaquoddy Bay has over ten lighthouses, on islands, on the New Brunswick mainland as well as on the Wolves Islands.

For tours of lighthouses from the water,  see Whale Watching boats.

Lubec has two: the famous West Quoddy Head Lighthouse (easternmost point in the U.S.), and Lubec Channel Light (aka the SparkPlug).

Campobello Lighthouses include The East Quoddy Lightstation (aka Head Harbour Light) and the Mulholland Point Light.

Cutler has the Little River Lighthouse.

Calais has the Whitlock Mill Lighthouse. 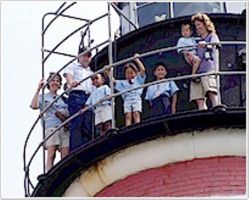 The most photographed is the famous candy-striped West Quoddy Head Lighthouse:

The light has the original Fresnel lens and the 50-step iron stair in the tower is still used by the U.S. Coast Guard, which is responsible for maintaining the light.

There is a Visitor Center and Museum (free admission) located inside the 1858 Light Keeper’s house, which is staffed by volunteers daily from:

On Saturdays during June, July, and August; usually on the Saturday after the 4th, when the West Quoddy Head Light Keepers Association holds its anniversary celebration; and on a Saturday in mid-September when the Coast Guard hosts Maine Open Lighthouse Day, the tower is open to the public.

Of the many thousands of visitors who come to West Quoddy Head Light each year, many are photographed next to the granite marker depicting the Easternmost Point in the U.S.A. The marker was dedicated in July 2005 by the West Quoddy Head Light Keepers Association in collaboration with the Maine Department of Conservation. 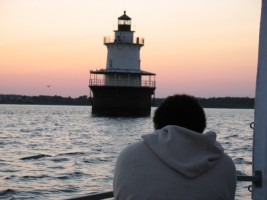 Also known as “The Sparkplug”

Has 5 levels, 2 of which were keepers’ quarters

In 1989, when discontinuation was planned, local residents mounted a “Save the Sparkplug” campaign and raised $700,000

In 1992, the renovation of the Sparkplug was completed 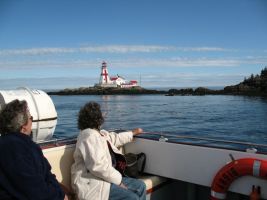 Also known as Head Harbour Lightstation, situated on a rocky outcropping at the northern tip of Campobello Island, it is one of the oldest and most photographed Canadian light houses. The station is accessible by foot at low tide, across a narrow walkway. The incoming tide rises 5 feet per hour, and people trying to cross once the tide starts to rise have been swept away and died. Very hazardous.

At the mouth of the Lubec Narrows, the MulhollandPoint Lighthouse is part of the Roosevelt International Park. Although the lighthouse is not open to the public, visitors are free to walk around the structure and to enjoy the picnic site next to it.

From the picnic area at Mulholland Point are views of the FDR Memorial Bridge, Lubec, Maine, the Channel Lighthouse, and the islands and waters of Johnson's Bay. Often, harbor seals can be seen swimming just offshore in the Lubec Narrows. Explore the Marine Life Exhibit in the old fishing shed.

The lighthouse is frequently photographed and painted as viewed from across the Narrows in the McCurdy Smokehouse garden on Water Street in Lubec. 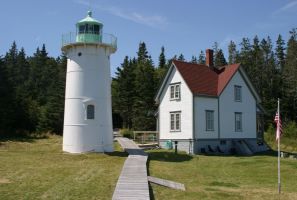 Located on a 15-acre island in Cutler Harbor, the Little River Lighthouse Station was established in 1847. The current tower dates from 1876. The lighthouse was a family station until July of 1950 when it became staffed by a rotating crew of Coast Guardsmen. Eventually the Coast Guard automated the lighthouse and closed it up. In 1998 Maine Preservation declared the lighthouse as on the Ten Most Endangered Historic Properties in the State of Maine. In April of 2000 the lighthouse was leased to the American Lighthouse Foundation, which in a partnership with the Coast Guard, began restoration of the tower. Shortly after the terrorist attacks of 9/11, and after being dark for 26 years, on October 2, 2001 the Little River Lighthouse was re-lighted as a “Beacon of Freedom to the World.” On July 27, 2002, under the National Historic Lighthouse Preservation Act (NHLPA), the entire island and lighthouse was transferred from government ownership to the American Lighthouse Foundation. It was the first lighthouse in New England to have its ownership transferred under the NHLPA. The restored lighthouse station is now managed by the Friends of Little River Lighthouse, a chapter of the American Lighthouse Foundation, which offers overnight stays in the keeper’s house. FMI go to http://www.littleriverlight.org/ or call (877) 276-4682. 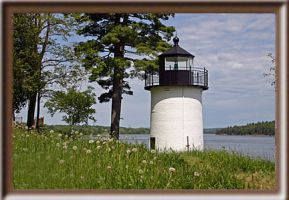 Whitlock Mill Lighthouse, is the northernmost lighthouse in the U.S. Still a working lighthouse, it sits overlooking the St. Croix River and is located three miles south of Calais, just 50 miles north of Lubec. It is visible from the river and can be viewed from the St. Croix River View Rest Area on Route 1 in Calais. The rest area is announced by a "Rest Area 1,500 ft" sign from the south. The view may be largely obscured by trees in summer.