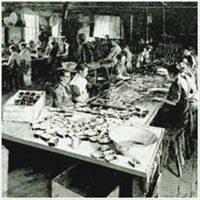 The Changing Nature of Lubec's Economy

Settled in 1785 and incorporated in 1811, Lubec was once a proud and bustling sardine canning and fish-smoking center. It was here in the Quoddy region that America’s sardine processing industry was created. 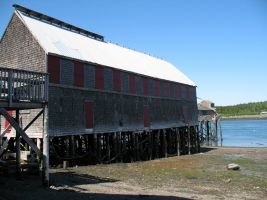 Smoking herring was a traditional process in Lubec from its beginnings, with traditional buildings called stands throughout the coast. But canning sardines arrived when, during the Franco-Prussian War of 1870, the New York sardine importer, Wolff & Reessing had great difficulty supplying sardines. As Julius Wolff saw his supply of French sardines diminishing and a gold-based government duty imposed on imports, he began looking for alternative sources, and found the Passamaquoddy region with its abundant supply of superior product. He came to the area and established the Eagle Preserved Fish Company at Eastport in 1875, packing and selling 60,000 cans the first year.

As other importers became interested, new canneries were built, and by 1880 there were 18 factories in Eastport and one in Lubec. In the following two decades, 23 sardine plants started-up in Lubec, and over the next forty years the industry continued to thrive.

Around World War II, the sardine canning and smoking industry boomed when purchases by the Federal government to feed U.S. troops accounted for 80 percent of the industry’s annual pack. In 1950, there were 50 sardine canning plants along the coast of Maine. The downtown waterfront was crowded with smokehouses, sardine canneries, lumber and coal businesses out on the wharves.

As markets developed for herring by-products such as fish oil, pearl-essence, fertilizer, pet food and lobster bait, more plants were constructed. However, by the 1960s, the domestic market for sardines had diminished, production was low and stocks were depleted by foreign fleets. Cheaper imports and costly mandatory pollution controls further constrained the industry. By 1975 only 15 packing plants were left in Maine. After 1977, Lubec had one working sardine factory still in operation while the second had switched to processing locally-farmed salmon. The McCurdy Smokehouse on Water Street, now a museum, was the last traditional smoked-herring facility in the United States when it closed its doors in 1991.

Lubec has celebrated its isolated existence and unique, unaffected character, community and culture for over two hundred years. With every intention of retaining that uniqueness, local businesses welcome and cater to summer residents, new home-owners from 'away', and seasonal vacationers.

For a small town, Lubec is blessed with a variety of accommodations for travelers and seasonal visitors alike. There is a motel, inns, several bed & breakfast establishments, and vacation rentals. These privately-owned small businesses, coupled with the local restaurants, cafés, coffee shops and local stores, provide further opportunities for employment.

There is a substantial number of self-employed people in Lubec, among them skilled artisans ready and willing to address the construction and maintenance needs of seasonal visitors and year-round residents.

The future of Lubec will continue to rely on the support of the service and trade industries as well as marine, forest and agricultural products. Added to these, an increase in seasonal vacationers, who appreciate the natural beauty of the area’s great outdoors and the uniqueness of Lubec’s culture, will bring further prosperity to the town. To assure a stable future, economic development is essential and new businesses choosing Lubec as their location are warmly welcomed.

During the 1980s, a delegation of Japanese businessmen came to Lubec looking for an alternative source of sea-urchins, should their preferred choice, the red urchin of the west coast, become unavailable. They experimented with the local sea urchins and have since kept the industry active.

Dragging or diving for sea urchins during the winter months, (the same method used to harvest scallops), has since become a sustainable local business. The harvested product is sold to buyers who take them to Portland or beyond for processing. 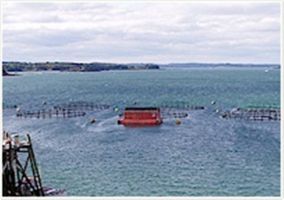 These locally-farmed salmon are first raised in a freshwater hatchery for about eighteen months, during which time they go through a physiological change known as smoltification. This makes the anadromous fish, which are born in fresh water in the wild, ready for life in the sea. As smolts, they are then transferred to the farm pens in Johnson’s, Cobscook and Passamaquoddy Bays, where they spend the next eighteen to twenty-four months growing large enough to harvest for market. Salmon aquaculture first began in Canada and quickly spread to the United States during the mid-1980s. Pen aquaculture succeeded in the region in large part because of the flushing action provided by the unusually high tides (more than 20 vertical feet) in the region.

The technology of aquaculture was first adopted by families and small groups of individuals who built pens by hand, and undertook the experimental phase of establishing aquaculture as a commercially-viable marine enterprise. They were helped initially by the high prices pen-raised Atlantic salmon garnered in the marketplace. As aquaculture flourished in Maine and other areas, the price of Atlantic salmon decreased and the profit margin became too narrow to run pens on a small scale. This led to Canadian corporations buying-out pens, aquaculture leases and businesses. The corporations compensated for the small profit margin by handling larger volumes.

Today, since some of the companies have moved, there are fewer harvests to process. Notwithstanding this decrease, in Maine the salmon-farming harvest has a farm-gate value in excess of $65 million dollars, with the salmon farms off Lubec being just a small part of the global production. However, over the past few years the number of active farms in the Cobscook Bay area has diminished along with the volume of fish harvested. Salmon farming is second only to lobstering as Maine’s most valuable marine product, though there are other marine products that also have value.

During the 1800's Downeast Maine was home to the richest fishing grounds in North America. Salt was used to preserve the valuable catches and correspondingly, during that period, several coastal saltworks operations flourished in Washington County Maine. Today, the time-honored tradition of salt-making has returned to the area. Using the frigid, pristine waters of the Bay of Fundy,  an all-natural high quality sea salt in a variety of grades, crystal sizes and flavors is produced.

Lubec families have continued to use their skills, talent and regional knowledge to make a living from marine and natural resources.

Lobstering is a year-round fishery, though it is slower and more difficult in winter. Unlike southern Maine where it is common to fish trawls of 10-15 pots, Lubec area lobstermen fish 'doubles' and 'triples', i.e., only two or three traps per set of buoys. The environment in Lubec waters limits the number of traps that can be efficiently handled in a trawl.

Lobstermen here typically put 100 lbs. of weight in a lobster trap to keep it from being moved around the bottom by the unusually high tides and strong currents. These same tides and currents limit lobstermen to a window of about 45 minutes to pull traps. The currents are so strong that the trawl buoys are irretrievable except in slack water. These conditions make it difficult to fish large numbers of traps.

Shellfish are harvested in their respective seasons, including scallops, crabs, periwinkles and clams. In order to earn a year-round living, this seasonality of fishing activity finds the hard-working population engaged in many other non-fishing-related, season-dependent, work. 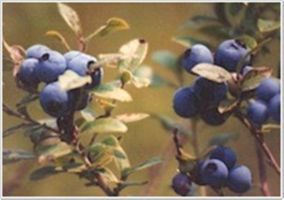 Maine is one of America’s largest blueberry-growing states, raising 90% of the low-bush blueberries in North America. Sixty thousand acres in production produces a harvest of over 75 million pounds, the major proportion of which is raked in Washington County. Many families from Lubec participate in blueberry raking. The prized, antioxidant-rich berries are harvested in the month of August and early September.

Forest products provide another source of income. From approximately the first week of November, multi-generational families begin the process of tipping, which is harvesting balsam fir brush for wreath-making.

The process of tipping and wreath-making begins once the sap in the trees has set, after the first hard frost. The sap setting 'sets' the needles, allowing a wreath to stay fresh and to last for months. Harvesters look for young tree growth that has had sufficient light to yield fuller boughs. The boughs selected are preferably sixteen inches long, pyramid shaped and look like a 'hand with five fingers'.

Tipping continues through early December and wreath-making to mid-December. Wreaths, handmade in Lubec, are shipped to homes and businesses nationwide, to decorate the year-end holiday season and fill the air with their unforgettable fragrance.